I aim for a consistent look in my portfolio – I even hope to one day have a style that is instantly recognizable as my own, but clearly I am not there yet.  As I look at the screen shot above from my artist website, I think my vibe is similar.  I aim to have a nice mix of floral patterns with global textiles and yup, I can mentally check that box looking at the above image.

The florals have some range in style – from bold to soft and the patterns are influenced by many cultural traditions from African prints to Shibori dyed fabrics.  The collections hang together well because you can clearly see my influence even though there are a range of techniques used to create the collections.  I create floral prints with contrasting patterns inspired by global textiles.  That’s my angle.  There’s more on that which I’ll cover in a later post.

I thought I was going along great creating collections that are cohesive in themselves, but also representative of my own style despite the different looks they have.

And then I got a bolt of inspiration for a new project and I was off in another direction entirely.  At least for this past week.

That was a bit of an issue but I forged ahead anyway, so enamored with my fish.  I knew in the end I wanted a collection of tropical fish inspired prints that would blend with my style, but it really took a lot of work to be able to pull off a collection from these beauties: 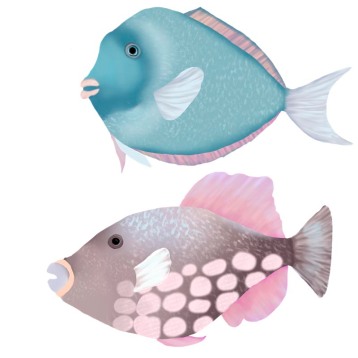 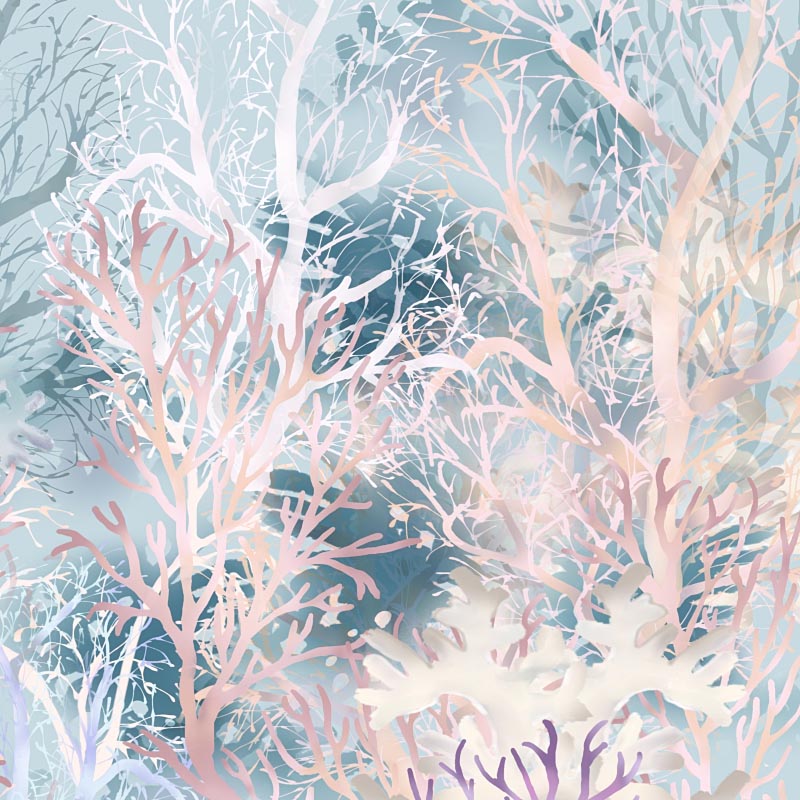 I started with the fish, and I really wanted a soft color palette.  So I used the same color palette on the fish as I used on my preliminary coral background.  When I put them together, they really needed some contrast, so I had to recolor them – then they were too bright, so I had to adjust the tone without losing the contrast.  Then I had to put them in an environment – and that created a whole host of other problems.

It had me pulling my hair out to make the main print work.  How could I make coral and an underwater scene look like it blended with the rest of my work?  Then I remembered the other problem:  Coordinates.  How in the world was I going to have coordinating prints developed from the one main print without having an entire collection of fish swimming in coral seas?

It drove me nuts for an entire week, but finally I arrived at a pattern collection that seems to blend with the rest of my portfolio.  I used the recolored fish in the coral environment (which was way bolder than I had initially thought it should be) and then had to use the elements and colors to develop coordinating patterns to go with the main print.

One week later, here’s what I came up with.

I was so frustrated that when I finally got it done I was relieved but not entirely happy.  I really thought I forgot my design goal of mixing florals with contrasting global textiles. I thought I became so determined to pull off this collection that I forgot about my “recognizable style”.

But after a few days I went back and looked closer at the collection.  The main print is just the beginning – but even in that one the coral looks a little like a batik.  The second and third prints also look like batik fabrics.  The wave print is a little Asian – almost like a wood block wave printed over a patterned background.

I thought I lost my way with this collection but really it just proved that the more I work – even when I think I’m completely off track – the more cohesive my style becomes.  I think that’s true for just about everyone.  Who you are as an artist comes out – no matter what you’re working on.