I’m stupidly excited that I managed to create my first Instagram puzzle.  I’ve seen the accounts that use these and I think they’re so cool – but I thought it would be super hard to do it, so I just let it slide until tonight.  I saw someone posting that they’d sell you the templates and instructions to do this – but I realized that with Canva, I could probably work out my own method to build one.

And I was right.  It took me less than an hour (including posting it to the Later App and putting in all the hashtags) – and I’m so excited that I just have to tell you how I did it.  Now, keep in mind this is my first attempt at doing this – so it’s probably not the most gorgeous puzzle you’ve ever seen – but since it is my FIRST ATTEMPT I think it’s pretty awesome! 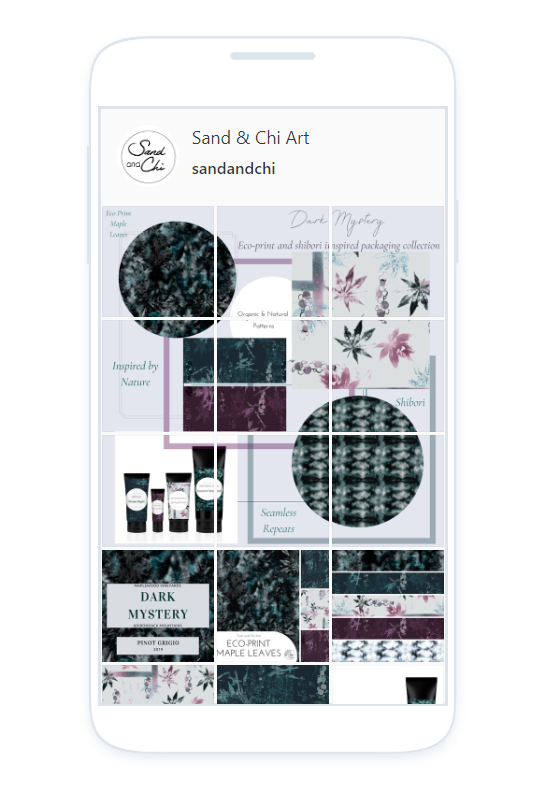 So here’s exactly how I did it.

In Canva, I selected a standard Instagram post.  I know Instgram posts are square, so I figured a 3×3 grid would give me nine posts (who said I wasn’t good at math?)

My next step was to layout all of the elements I wanted to include in that one post.  I wanted to use photos and words, so I just played around until they all fit with some feeling of order (I wanted a snippit of the pattern with a phrase in every post and I wanted them to overlap to increase the “mystery”).  I placed photo elements where I wanted the patterns so it was simple to place the designs because I had already uploaded the thumbnails of the patterns to Canva.  Then I just shifted things around until I was happy with the look.

The white product mock-up bothered me a bit because it really stuck out – but adding a plain white circle in the upper boxes fixed that imbalance to my satisfaction.  When I was totally happy with the look, I increased the file size in Canva to 3000 x 3000 pixels.  Then I downloaded the .png file and opened it in Photoshop.

Once the file was opened in Photoshop, I used my ruler tool to outline it and mark off every 1000 pixels horizontally and vertically.  This made the next step easier and more accurate than trying to guesstimate where the previous image ended.

I set my rectangle select tool to 1000 x 1000 pixels.  Starting in the upper left hand corner, I selected my square, copied it into a new 1000 x 1000 px document and moved on to the next square.  Copy.  Paste into new document.  Repeat.  Nine times (using the hotkeys it’s really seconds to copy all 9 squares).

The final step was naming them all and putting them into the same file so I could find them easily and upload them to Later.  Starting with “untitled 9” (the last box in the lower right) – I began moving backwards naming each file Day 1, Day 2, etc.  So Untitled 9 (bottom right) becomes the day 1 post and Untitled 1 (top left) becomes Day 9 because it’s in reverse order that you post them.

Then I uploaded all of them to later and scheduled them in order (day 1, day 2, etc.).  Voila!  An Instagram puzzle.  I do have to warn you that not all of mine uploaded in order – two were out of place, but since I knew what the puzzle was supposed to look like it was easy to pick the right file.

The moral of the story is I don’t need to buy someone else’s template (and now you don’t either).   The only problem I forsee (and I haven’t figured this out yet) is what happens to my puzzle when I start posting single images again?  I imagine it’ll get all messed up until every 3rd post – but we’ll see…